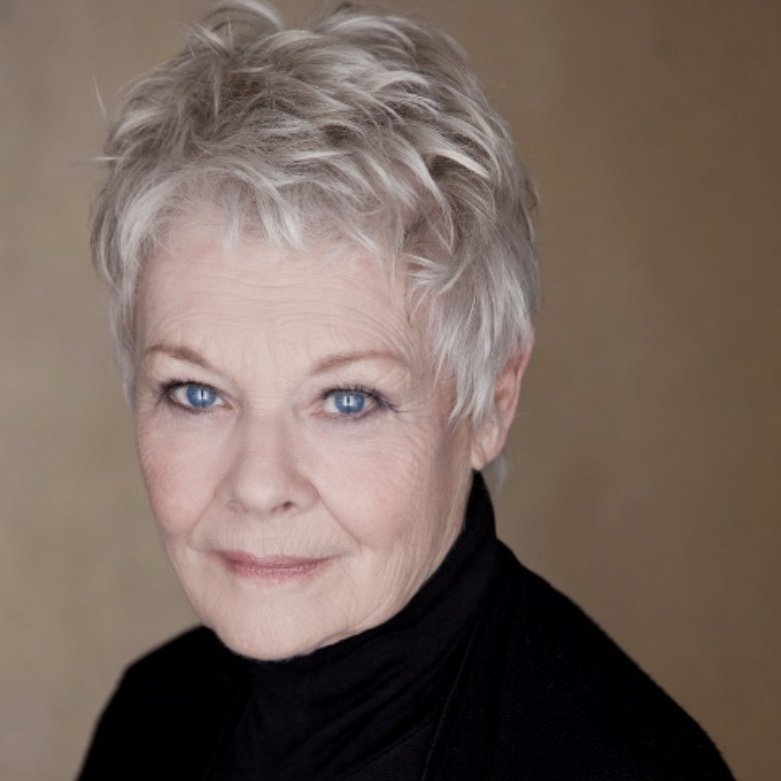 We are very fortunate to have Dame Judi Dench as our Patron.  Born in York, Judi has garnered every acting award it is possible to receive at least once with an Oscar and 6 BAFTAs to her name just for starters.

Dame Judi understands all too well the challenge of sight loss as she is living with age-related macular degeneration which has caused her to stop driving and curtail other activities.

Dame Judi says “Our Living and Learning Zone enables people with sight and hearing loss to recognize that life can still be fun, enriching and fulfilling.  With this in mind, I wholeheartedly endorse the Wilberforce Trust’s vision for the future” 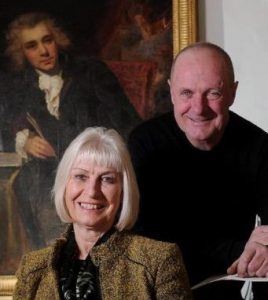 In February of this year, 2020, we were thrilled to discover that the great, great, great, great-grandson of William Wilberforce, the anti-slavery campaigner, was willing to become an Ambassador for the Trust.

To have an association with the descendant of the man we are named in honour of, was a huge privilege and we went to meet him at his beautiful home, Markington Hall, near Ripon in North Yorkshire. This estate passed to the Wilberforce family in 1733 and William and his wife Julie look after its upkeep whilst allocating space for weddings and glamping breaks.

His home still contains many souvenirs of the great man including a portrait, a cameo containing a lock of his hair and an iron box made from a slave’s manacles given to him in thanks. William was able to attend the launch of our Club Wilber project and had offered his home for an event which we are hoping to organise once the threat of Covid19 has passed.

We hope to be able to organise a fundraising event at Markington Hall when conditions allow. 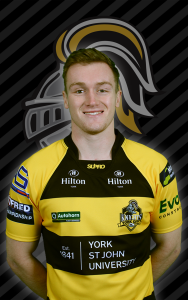 Will Jubb plays as a hooker for the York City Knights and has worked incredibly hard to become a semi-professional rugby player.  Will was diagnosed with retinoblastoma in his right eye when he was two years old.  He’d shown no signs of any discomfort at all and the cancer was only detected when his mum noticed that one of his pupils had a white glow in a picture that was taken.  After visiting the optician and having numerous tests at the hospital it was confirmed that the cancer had grown to the point where Will needed to have his eye removed.

Will has never allowed his visual impairment to hold him back and was very active in different sports as a child.  His interest in rugby came from watching his brother play and so at age 10 he started playing for Hull Wyke.  At age 15 he was signed on the Hull Kingston Rovers scholarship programme and continued playing for the academy until he was 18 and the two academies joined to become the City of Hull Academy.  He spent one year at the new academy and then made his debut for Hull Kingston Rovers in a victory over London Broncos scoring a try in the process.  After spending 3 years at Rovers he signed with York City Knight’s after spending time there on loan.  In his first year as a contracted player he helped them win the league and gain promotion to the Championship.

“I want to be a role model to the kids to show them that sight problems shouldn’t hold them back from anything they want to do.  I have been able to do everything I wanted to do, and it has never stopped me, so I want to inspire them to chase their dreams, not just in sport but in all aspects of life.  I want to be proof that they can succeed and achieve whatever they set their minds to and Club Wilber is a brilliant way to include the kids and show them that it is possible to do these things.”

Nigel Limb was racing on Mablethorpe Beach back in December 2015 when he crashed and was left in a coma after his head swelled to twice its size.

His wife was told that an MRI scan had revealed that Nigel had severe brain damage and would most likely die from his injuries within the next few days or be left in a vegetative state. The consultant requested permission to turn off his life support machine and his wife asked if it could be left on over the weekend while she got ready to say goodbye.

Then, on Monday, he woke up. The crash had caused major sight loss and Nigel had to face the loss of his business running a garage and as a floating MOT Tester. There were some tough times ahead. Despite his sight loss, you couldn’t keep Nigel off a bike for long. He had the skill, he had the muscle memory and when Scunthorpe Speedway invited him to get back on a bike he completed six laps to tremendous applause.

For the Wilberforce Trust, Nigel is an amazing Ambassador. He is living proof that life doesn’t end when you lose your sight. It doesn’t have to mean the end of your hopes and dreams and your passion for your favourite hobby. With the right support and adaptation, life can still be full of fun and happiness as well as the challenges and frustrations that come with any disability.

Now known as the “Blind Bloke Racing” Nigel has made a documentary with his wife Julie about their experience and he has appeared at different biker’s events telling his story. We have found the biker community to be a generous and warm-hearted bunch of people who love nothing more than to talk bikes and now we have Nigel on board we hope that next year’s Bike Show will be even bigger. Being a fantastic role model for visually impaired people was never Nigel’s plan but he has shown by his example, his courage and his determination that he can bring hope to other people facing sight loss. 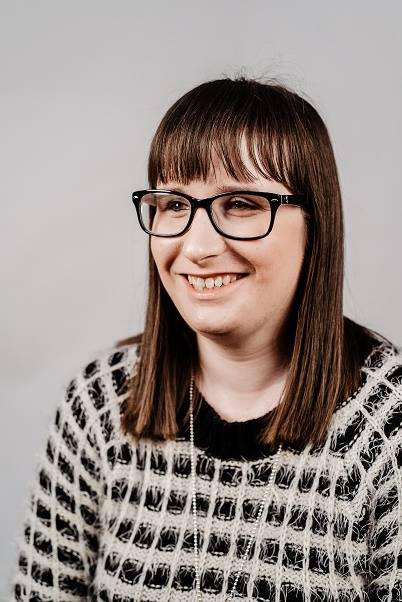 My name is Holly Tuke and I’m the author of the blog Life of a Blind Girl, I became an Ambassador for the Wilberforce Trust back in April 2019.

When I was asked if I would consider becoming an Ambassador, I knew that it was something that I wanted to do straight away. I’ve been involved with the charity for years, I started off my volunteering journey at the Wilberforce Trust when I was a teenager as I taught braille to other blind and visually impaired people and also did some work experience when I was at school. I’ve tried to stay up-to-date with the charity ever since and it’s wonderful to have seen it grow into what it is today, I can’t wait to see what’s in store for the future.

I feel very honoured and humbled to be an Ambassador for a local charity that I have been involved in for years. Having a vision impairment myself means that I know how vital the services are that they offer and what an impact they can have on disabled people’s lives.

I wanted to become an Ambassador because I have a passion for helping others, raising awareness on vision impairment and disability, tackle some of the common misconceptions surrounding sight loss and disability but most of all, I want other blind and vision-impaired people to know that they can achieve their goals despite having a disability.

I also want to promote the positives that having a vision impairment can have on your life, people are often so caught up on the negatives that things such as learning unique skills and being part of the sight loss community are sometimes overlooked. Through my role as an Ambassador, I hope to encourage people to strive to achieve their goals and view their vision impairment in a positive way.

I can’t wait to see where my role as Ambassador will take me and I am extremely grateful for the opportunity. 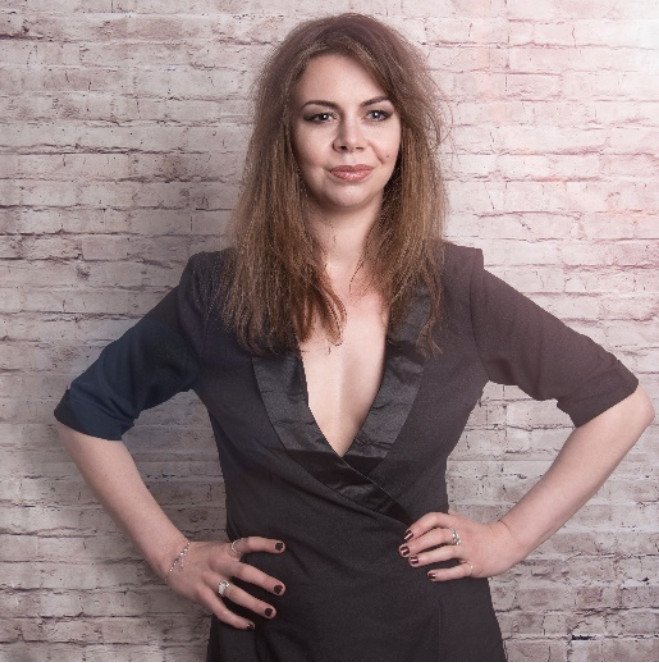 Georgie Morrell has glaucoma and has lost the sight in one eye. She is a stand-up comedian and award-nominated actor.  Her stand up shows “A Poke in the Eye” and “Eye-Con” has received 4* reviews, Edinburgh Fringe runs and toured the UK.

She has appeared at the York Comedy Fringe for 2 years running and we hope to welcome her back again next year.

Georgie is currently working on the BFI funded film Blind Ambition with Silver salt Films and can be found gigging up and down the UK.  Follow her @TheGMorrell.

“Engrossing…highly entertaining and well worth seeing.” 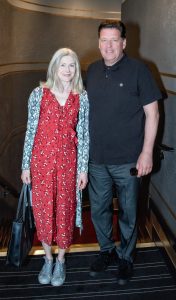 York actors, Andrew Dunn and Andrina Carroll were the first to agree to be Ambassadors for the Trust in 2018 when we launched our Ambassador programme.

Andrew has had many TV roles including Tony in Dinner Ladies and roles in Coronation Street, the Bill, Bremner, Bird and Fortune and many other film and TV roles.

Andrina has appeared in Emmerdale, films such as “Between Two Women” and many stage roles.

They say “We are delighted to see the Wilberforce Trust creating such an amazing facility in our City. This will be a unique resource for people with sight and hearing loss and we are happy to offer our support” 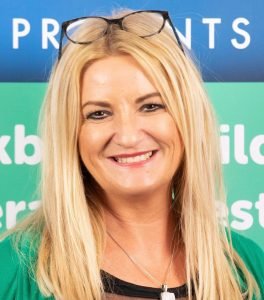 Christina is an award winning English children’s author and founder of Children’s Literature Festivals charity.  She loved to read poetry and rhymes in her earlier years and started writing after having her own children and particularly focused on stories which would help them overcome their fears and fears that she had as a child.

Christina’s award winning safeguarding book Share Some Secrets has been endorsed by the NSPCC and Barnardo’s.  Free copies are in the NSPCC Library and the NSPCC Online shop, helping to raise funds and educate children.

Christina set up a national poetry initiative in 2013 that has now encouraged over 25,000 children to ‘have a go’ at writing poetry, picking up The Peoples Book Prize Dame Beryl Bainbridge Award in 2015.

Christina is proud to be an Ambassador for the Wilberforce Trust because she recognises that sight loss can cause some of the same problems with self confidence that she herself experienced in her early life.  She became an ambassador in August 2021.